We get calls often from people who suspect they have termites but are not entirely sure. Bugs as a whole can be very difficult to identify because of their various nuances and small size.

So we put together a little photo tutorial to help you to answer that nagging question “What do termites look like?”

Termites create these small mud tubes that they use to move around with. On the exterior and interior of buildings you can see theses mud tubes usually emanating from the ground and moving into a possible food source. These mud tubes can protect the termites from predators and drying out. They are quite messy and linger around the food/wood source which is different from the behavior of a carpenter ant, which cleans out the wood it is chewing on. Long after the presence of termites are gone the mud tubes can still linger around and even stain a home or business’s foundation block, which can tip you off that termites were at one time present. One of the funnier descriptions of termites that I have heard is that they are like moving rice. Not entirely correct, but a good starting point. Termites have cylindrical shaped bodies that are relatively equal in width from head all the way to butt. This is different from an ant, spider and many other insects which have distinct width changes along their body. Termites, the workers specifically, are also white or cream colored (with some possible variants) which makes them easy to spot when you disturb a colony moving over some firewood pile or removing a dead tree in the yard. When you see a large mass of ‘moving rice’ in your yard or around your house, then you have a strong possibility of having termites.

Soldier termites, a particular type of termite within a colony, have a golden-brown head and darker pinchers on their head than a worker termite. Soldiers though are small in number, in comparison to the workers, but visible especially when you might stumble upon a colony that is being attacked by some ants. 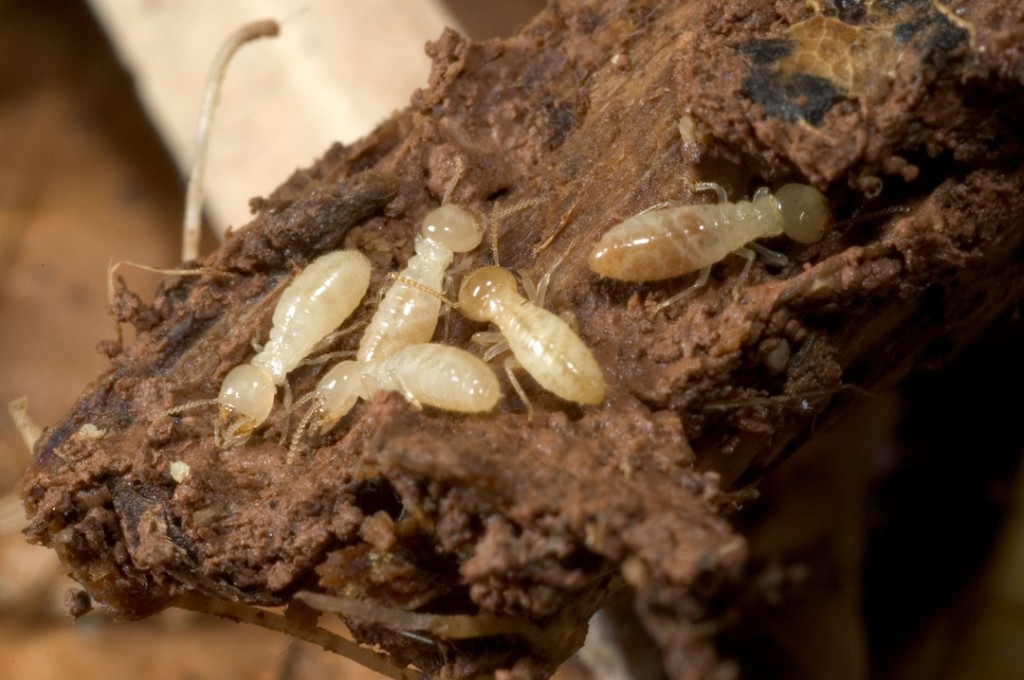 Need Pest Advice From an Expert?

Eating Along the Wood Grain

Subterranean termites, which are what we generally have in East Tennessee, are known to eat along the wood grain. So if you find wood that has erratic decay in pockets or against the grain, then you might be seeing water damage versus termite damage. Formosan subterranean termites, which are not as common in our area do tend to eat more indiscriminately, so do not completely rule out termites. Just note that the termites in our area will opt to chew along the grain line of wood. Springtime to early summer is commonly referred to as ‘swarm season‘ in our area of the world. Swarms of termites are sent out from a colony to find a mate and start some new colonies. A swarmer is considered a reproductive termite from within the colony. The workers and soldiers are sterile termites and tending to the queen, the soldiers, and the colony is their whole lot in life. Reproductives will be more of a pale brown in color, which often has them confused with flying carpenter ants. The big identifiable difference between the two are the sizes of their wings. Termite swarmers wings are equal in length, where the carpenter ant has two sets up wings that are different lengths. The Queen is Gross

If you dig around through a termite colony you might be able to find the queen of the colony. From our vantage point, the queen is rather grotesque. Imagine a termite head and body with a huge cocoon sack off their bottom. That sack will pump out thousands of termite eggs a day (in a mature queen) but it also is such a size that it renders the queen immobile. So the worker termites tend to the queen constantly.

Still not sure what termites look like? How bout check out this video from our friends at BedBug Central & HowCast.

If you are still not sure if you have termites at your home or yard then feel free to give us a call for a free home inspection. We are proud to serve our neighbors in Knoxville, Sevierville, Maryville, and surrounding areas since 1984 with quality and care. Our goal is to help you to be bug free in your home and protect your family investment with professionalism and quality.

Shake Out Your Bags Before Leaving Africa